The Hungarian government has proposed amendments to the National Higher Education Law that would make it impossible for Central European University – and possibly other international institutions – to continue operations within the country. 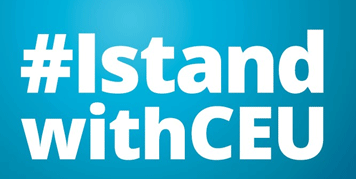 Thousands of people marched in Hungary’s capital on Sunday 2nd April to protest proposed legal changes that are seen as targeting a Budapest university founded by Hungarian-American philanthropist George Soros.

Many Hungarian and international scholars and institutions, including The American University of Rome, have expressed support for Central European University. The school, founded by Soros in 1991, enrolls over 1,400 students from 108 countries.

Prime Minister Viktor Orban considers Mr. Soros an ideological foe whose “open society” ideal contrasts with his own efforts to turn Hungary into an “illiberal state.”

The draft law, scheduled to be debated by lawmakers on Wednesday, sets new conditions for foreign universities in Hungary. One would force CEU to open a campus in New York state, where it is accredited but does not carry out academic activities, while another could make it change its name.

The CEU, established and registered in New York State, is an independent, private university for masters and PhD students from more than 100 countries.

If approved by parliament, the new law would mean the university can only continue working if an intergovernmental agreement between US President Donald Trump and Hungarian Prime Minister Viktor Orban is signed, and if the university establishes a campus in the US by February next year.

Twenty-seven other foreign universities will be affected by the legislation, Education Secretary Laszlo Palkovics stated, and all must abide by the new law.

Only the CEU has no campus in its home country, the US.

But CEU Rector Michael Ignatieff says the university is fully legal and the new law has been designed to disable it.

“We will defend our achievements vigorously against anyone who seeks to defame our work in the eyes of the Hungarian people,” he said.

“CEU is a unique institution: our 1,500 masters’ and doctoral students come from 117 countries, our faculty is drawn from 51, we are accredited in Hungary and the United States and our mission is to teach the values of open society: free minds, free politics and free institutions. We recently celebrated our first 25 years, and in that time we’ve attained world-class rankings in teaching and research, we’ve graduated almost 14,000 alumni who carry our values back to their home countries and we’ve opened brand new campus buildings in the historic heart of one of Europe’s greatest cities.

“In a world of polarization and division, a world where the status of facts is so deeply contested, the work of universities like ours in bringing men and women together around a shared respect for knowledge is more important than ever. We must remain dedicated to the task of teaching our students that knowledge is the only sure guide to moral choice and public policy. Universities like ours cannot retreat from the world. We must always be doing our part to help understand the problems our societies must solve if we are all to survive and prosper. We must never stop asking: what is incontestable in our understanding? How do we expand the continent of knowledge? If we truly care about knowledge, if we winnow the grain of knowledge from the chaff of ideology, partisanship, rhetoric and lies, we will be doing the university’s part to defend free and open societies.”

Dr. Richard Hodges, President of The American University of Rome, sent the following letter in support of CEU:

I write as the President of the American University of Rome, and as an academic who has twice taught at the Central European University (CEU).

I cannot overemphasise my admiration for CEU, its teaching and its students. In the fields that I know well, it ranks as one of the top-ranking universities in Europe.

Over twenty-five years CEU has shown itself to represent the very best of Hungary and its people, an illustration of the highest international educational standards.

Learning of the threat to the university, the American University of Rome and I therefore wish to express our wholehearted solidarity with Central European University and express our profound concern at proposed legislative changes to CEU’s status in Hungary. These changes would endanger the academic freedom vital for CEU’s continued operation in Budapest and would strike a blow against the academic freedom that enables all universities, including those in Hungary, to flourish.

On behalf of the university I respectfully urge your government to withdraw the proposed legislation and enter into consultations with CEU. If you proceed with this legislation you will do great harm to Hungary’s well-founded international academic reputation, to its relationships with its European partners and with the United States.

To find out more about this ongoing crisis and to express your own support please visit the CEU website.