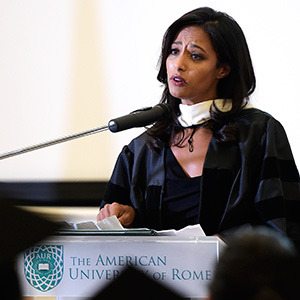 Thank you for that gracious introduction and for this extraordinary honor. In particular I would like to thank Richard Hodges, the President of the University; the Dean, Lisa Colletta; and my daughter, Miral Rivalta.

That we are at this august institution reminds us that education is the single most important door to open, for all.

Without an education --- that one opportunity --- I would not be the woman that I am today:

A critical thinker that defied the odds.

As a black Muslim woman, I was told not to study because any degree will end up hanging in a kitchen.

But I had different dreams.

I wanted to study at the American University of Beirut.

That was not possible because my country --- Israel --- did not have diplomatic ties with Lebanon.

Yet here I am today receiving an honorary doctorate from the American University of Rome.

Sometimes I look around at my life and ask: How did I get here?

My journey would have been impossible without education.

My story started way before I was born.

In 1948 a woman named Hind Husseini built an orphanage and school for 55 Palestinian children left without homes after the Deir Yassin Massacre.

In the conflicts that followed, as the world was building armies, she built citizens. 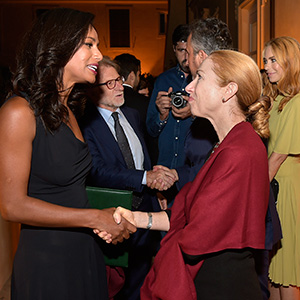 She empowered young girls, giving them hope and confidence --- she opened up the door.

And I was one of her orphans who walked through it.

Mama Hind gave us books, telling us that a hungry brain ends up devouring itself. She taught us in class, and --- through reading --- she taught us how to teach ourselves.

My education was not limited to lessons from books and Mama Hind.

When I was 8 years old I learned the most important lesson of my life.

An Israeli solider stopped my father at a checkpoint and demanded my father’s Identification.

When my father handed his document to the soldier, the soldier --- intentionally --- dropped it on the floor.

Even at 8 years old, I realized what was happening. The soldier wanted to humiliate my father in front of his children, by making him bend over to pick up the ID. My father and the soldier momentarily locked eyes.

I was afraid. I was very afraid. I felt powerless.

But somehow, in that moment, I knew what I had to do.

I stooped down, grabbed the ID myself, and gave it to the soldier. This simple act de-escalated the situation, and the soldier let us go.

This seems a small moment, but I have thought of it many times over the years. I learned from that experience that I would not let fear rule my life --- that courage is resistance to fear not the absence of fear.

You can be afraid, and still act bravely, in the same moment.

When the soldier let us go, my father looked at me. He was emotional. He said to me: “I taught you how to fly. But you will fly higher than I ever dreamed.”

I also received an education facing the reality of my segregated homeland in East Jerusalem.

Growing up as a Palestinian and Israeli citizen, I saw contradictions all around me, I saw rules that made no sense. I saw injustice, and I saw beauty. I learned to question the way things were.

As I read books about world history, I realized how things could change with a simple question, or a refusal to accept things as they are. Like Rosa Parks, asking herself –why--- she must sit in the back of the bus.

Her question, and her refusal to accept things as they were, inspired millions----not just in the United States. She inspired me, to ask the same questions.

I AM NOT AN EXCEPTION. I am the rule.

When women are given pathways to education and this door is finally open to them, they join me. They join Malala. They join Mama Hind. They will walk through that door and become leaders like Ellen Johnson-Sirleaf, the president of Liberia who ended the civil war.

There are billions of us.

There are refugees in factories, on farms, in tents, in mosques and in churches around the world. Waiting for an opportunity.

100 years ago, the suffragettes gave their lives so that women could vote and be free to write our own destiny.

We have a responsibility towards those women to move forward, to fulfill their dreams, with education & dignity.

I read somewhere: “Don't tell girls that the sky is the limit when there are footsteps on the moon.”

I want to say this to all the little girls around the world:

Never doubt that you are valuable, powerful and deserving of every opportunity in the world. 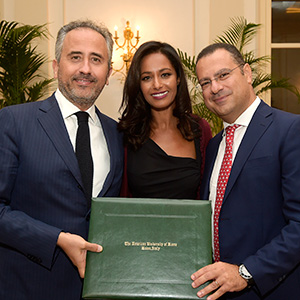 To you in this room, I invite you:

If you want to invest in your own future, if you want to live in a different, more tolerant peaceful, respectful & humane world, then you must unleash the potential & talent of these girls.

Uplift them with education. They will become the leaders of tomorrow that will make that better world a reality.

Again, thank you for bestowing this great honor on me --- I accept it humbly and on behalf of the multitudes of women who will follow through a door that we open together.