Our podcast series reflects the broad scope of subjects and personalities that make this institution unique - we hope that you find something both enjoyable and stimulating as you browse through the interviews, shows and ephemera.

A podcast aperitivo under lockdown
Episode 4: Project EurHope: Together We Can

When we heard about Project EurHope, an initiative put together by five current International Relations & Global Politics students, we were very eager to invite them for a virtual aperitivo to find out more. While all of our podcasts have a global outlook, this one really takes the cake: in this episode we are joined by Adriana, Irene, Miriam, Bashir, Dario, and their professor, Irene Caratelli, zooming in from various corners of the world to discuss EurHope. On top of dealing with their studies being interrupted by lockdown, completing their semesters via remote learning, and preparing for their finals, these students have launched both a project and a petition that seek to push for coordinated action by EU states to tackle issues that affect them all, most pressingly Covid-19, while also opening up constructive dialogue regarding the EU among young people. We were blown away by our students' vision and dedication, and we are sure that you will be too - so be sure to tune in.

A podcast aperitivo under lockdown
Episode 3: From Rome to Berlin with Clifford Curda and Lorenzo Errico

As the saying goes, “It’s 5 o’clock somewhere…” Wherever you are around the world, we invite you to take a pause, kick back, and join us for an aperitivo. Raising a glass with us this week are Clifford Curda ( BUS, '14) and Lorenzo Errico (SA, '12), both Business Administration alums and both brilliant members of our Alumni Council. Since their paths crossed during Lorenzo's study abroad semester at AUR, they have remained good friends and are by happy coincidence both now based in Berlin, Cliff studying for his MBA and Lorenzo working in marketing and fan engagement for a music label. Tune in for talks on new technology in the music industry, insights into working for one of the world’s biggest automotive co​mpanies, tips for students graduating in a time of financial difficulty, and of course some fond recollections of AUR. Cin cin!

A podcast aperitivo under lockdown
Episode 2: Adventures in science journalism with Alessandra Potenza

Here to brighten your Tuesday is another virtual aperitivo hosted by Ellie and Laura. This week's guest is AUR alumna Alessandra Potenza (COM, '11) who treats us to tales of her adventures in science journalism and gives an insight into the fascinating topics of her research. Tune in!

Chiara De Mattia, 20-year-old Travel and Tourism Management major, talking to Laura and Ellie about traveling, studying, sharing toothpaste, and authoring her first book at the age of nineteen.

You can follow Chiara's further adventures on Instagram at https://www.instagram.com/chiara_traveler_/ and on her blog at http://unannoinusa.com/ where you can also purchase a copy of her book 'Ad un metro da terra'.

It may never have occurred to you to take any interest in Latin epic poetry but do not skip this episode thinking it will not interest you - this is a tale of brutality and redemption and is explained in fascinating detail by Professor Gwynne.

And there's some discussion of daffodils...

In 1583 five Jesuit brothers set out with the intention of founding a new church and mission in India. Their dream was almost immediately, and brutally, terminated by local opposition. When their massacre was announced in Rome it was treated as martyrdom. Francesco Benci, professor of rhetoric at the Collegium Romanum, immediately set about celebrating their deaths in a new type of epic, distinct from, yet dependent upon, the classical tradition: Quinque martyres e Societate Iesu in India.

Paul's new book is the first critical edition and translation of this important text. The commentary highlights both the classical sources and the historical and religious context of the mission. The introduction outlines Benci’s career and stresses his role as the founder of this vibrant new genre. Below the podcast you can view a 'teaser' video for Professor Gwynne's book - the video itself was created by one of AUR's talented students

This volume provides a comprehensive survey of virtually all of Noam Chomsky’s texts and public talks that focus on the region of the former Yugoslavia, from the 1970s to the present.

The Balkans, in particular the turbulent ex-Yugoslav territory, have been among the most important world regions in Noam Chomsky’s political reflections and activism for decades. His articles, public talks, and correspondence have provided a critical voice on political and social issues crucial not only to the region but the entire international community, including "humanitarian intervention," the relevance of international law in today’s politics, media manipulations, and economic crisis as a means of political control.

This volume provides a comprehensive survey of virtually all of Chomsky’s texts and public talks that focus on the region of the former Yugoslavia, from the 1970s to the present. With numerous articles and interviews, this collection presents a wealth of materials appearing in book form for the first time along with reflections on events twenty-five years after the official end of communist Yugoslavia and the beginning of the war in Bosnia. The book opens with a personal and wide-ranging preface by Andrej Grubačić that affirms the ongoing importance of Yugoslav history and identity, providing a context for understanding Yugoslavia as an experiment in self-management, antifascism, and multi-ethnic coexistence.

Peter Gould, M.A. Sustainable Cultural Heritage and M.A. Arts Management, seeks to identify the success factors associated with economic development projects within communities adjacent to archaeological or heritage sites, a growing interest among archaeologists and heritage managers. Typically, the success of site museums, tourism businesses, or crafts cooperatives is rarely reported on in scholarly literature or subjected to systematic study. This new book, Empowering Communities through Archaeology and Heritage, addresses that gap.

This is the first book to address how cultural heritage managed correctly can be an economic driver. Empowering Communities is a book that has huge implications for anyone interested in the future of archaeology and its management, especially in Mediterranean countries like Italy.

"The Rise (and Fall) of Demagogues" with Professor Matt Qvortrup

AUR honored the memory of its late Professor, James Walston, with a lecture by AUR Visiting Professor of Political Theory in the International Relations and Global Politics Program, Dr. Matt Qvortrup: "The Rise (and Fall) of Demagogues".

Dr Matt Qvortrup is an internationally recognized political scientist with a strong presence in the world of practice – in politics, diplomacy and in the media. Described by the BBC as ‘the world’s leading expert on referendums”, he has specialized in Comparative Politics.

In addition to his academic work, Professor Qvortrup writes op-eds for The Guardian, Newsweek, El Pais, The Times, Foreign Policy, and the LA Times. He is the author of the acclaimed biography Angela Merkel: Europe’s Most Influential Leader (Duckworth - Overlook 2016), which has been translated into Chinese, Russian and Korean.

A conversation with Tom Campbell, former director of the New York Met.

Former Museum Directors Richard Hodges (University of Pennsylvania Museum of Archaeology and Anthropology and currently President of The American University of Rome) and Tom Campbell (New York Metropolitan Museum of Art) in conversation about the challenges of running a museum in the age of technology & social media.

As Director of the Met, Tom Campbell spent nine years pushing through a modernization campaign, heavily investing in digital technologies and dramatically expanding the institution’s engagement with Modern and contemporary art. He also embarked on an ambitious infrastructure strategy, improving existing spaces while building new ones. While there were many vocal critics of Campbell's approach he staunchly maintains that museums are now "challenged to make ourselves relevant not only to existing audiences but to new audiences." Upon departing the Met, Campbell received a prestigious Getty Rothschild Fellowship to conduct research at the Getty Museum in Los Angeles and then England’s Waddesdon Manor, a period he has said he will use to continue his exploration of the digital future of museums.

Archaeologist Louise Schofield on Gold Mines, Hyenas and Searching for the Queen of Sheba

Louise Schofield has been working in Ethiopia since 2006, directing archaeological, conservation and development projects in that extraordinary country. The search for the Queen of Sheba brought her to her current site in Tigray, northeastern Ethiopia. Here her excavations have discovered a temple (probably dedicated to a moon god), an ancient battlefield, two cemeteries (including the burial of a 2,000 year-old Ethiopian ‘Sleeping Beauty’) and – most recently – a large palace. The earliest areas of the site date back to a time when it was part of the land of Sheba (9th–4th centuries BC) whilst other parts constitute a hitherto lost kingdom of the Axumite Empire (2nd–4th centuries AD).

AUR Alumna and Business Club founding member Bronwyn Sweeney (BUS ’07) flew in from London to give a lecture to students about the day-to-day life of an advertising copywriter. She was also kind enough to kick-start our 'Alumni Round Table' podcast series.

Mouth of the Wolves is a series of audio and video podcasts created by students for their class FDM211 - Introduction to Podcast and Vidcast. These shows are planned, produced and edited solely by the students (under the guiding eye of Professor Brian Koperski). Often insightful and invariably entertaining -be prepared to enjoy randomness and distraction as you glimpse the lives and philosophies of our multi-cultural, international students.

An interview with David Jennings, CEO of the York Archaeological Trust

Former chief executive of archaeology and heritage practice at Oxford Archaeology, David took over as Director of The York Archaeological Trust (YAT) in April 2013. YAT is an independent charity, founded in 1972, which investigates the past for the benefit of present communities and future generations – and is one of the bigger employers in entrepreneurial archaeology in the UK with the celebrated Jorvik Centre.

Linking professional skills and archaeological expertise with a broadly based background knowledge and experience, YAT carries out carefully targeted and cost effective archaeological recording, excavation and research for a broad range of clients and partners. The results are made available in a number of innovative and dynamic ways including websites, education days, publications and articles.

A thoroughly entertaining and informative conversation between Richard Hodges and AUR Professor, Andrea Di Robilant on the publication of his latest book,

Autumn in Venice: Ernest Hemingway and his Last Muse.

Di Robilant’s latest publication gives us the remarkable story of Hemingway's love affair with both the city of Venice and the muse he found there. In the fall of 1948 Hemingway and his fourth wife traveled for the first time to Venice, which Hemingway called "a goddam wonderful city." He was a year shy of his fiftieth birthday and hadn't published a novel in nearly a decade. At a duck shoot in the lagoon he met and fell in love with Adriana Ivancich, a striking Venetian girl just out of finishing school. Di Robilant--whose great-uncle moved in Hemingway's revolving circle of bon vivants, aristocrats, and artists--re-creates with sparkling clarity this surprising, years-long relationship. Hemingway used Adriana as the model for Renata in Across the River and into the Trees, and continued to visit Venice to see her; when the Ivanciches traveled to Cuba, Adriana was there as he wrote The Old Man and the Sea. This illuminating story of writer and muse--which also examines the cost to a young woman of her association with a larger-than-life literary celebrity--is an intimate look at the fractured heart and changing art of Hemingway in his fifties..

Autumn in Venice: Ernest Hemingway and his Last Muse is published by Alfred A. Knopf. 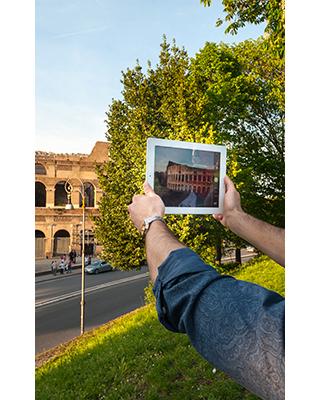