Interning at Casa de México was a rewarding experience that allowed me to promote Mexican cultural heritage in Madrid. This opportunity was found and secured independently as I felt strongly about assisting the newly founded cultural center. My role there included profiling visitors, assisting them and developing strategies on how to improve their experiences. This was achieved by conducting social research to obtain qualitative information and quantitave data. My final report helped the cultural center understand their strengths, weaknesses, opportunities, and threats from a third-party perspective. I acquired valuable research, interpersonal, and management skills at Casa de México. They remain committed to enhancing visitor experiences and increasing cross-cultural interactions between Mexico and Spain.

- Sergio Enriquez
An early 20th century palace in the Chamberí neighbourhood is a municipal space offered by Madrid City Council to house this centre  that acts as a bridge for cultural  and knowledge exchange between Mexico and Spain. It forms part of the Mexican Embassy.
The 2,700 square metre building has four floors on which the “Martín Luis Guzmán”  bookshop of the  Fondo de Cultura Económica, an auditorium, a shop specialised in popular art, exhibition halls, a permanent collection  of Mexican art, a space for community workshops, a gastronomic hall and the Mexican Punta Arena restaurant are located. It will also house the Mexican Institute in Spain or the Octavio Paz Library, which will be the most comprehensive in Mexican topics in Madrid. (from esmadrid.com) 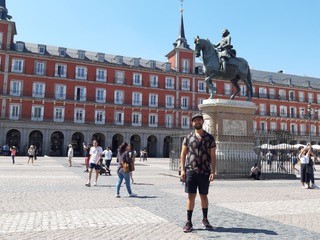 Related Links:
The AUR Difference
Living in the Eternal City