Newly arrived graduate students embarking upon their M.A. programs this Fall 2017 enjoyed a walking tour with Prof. Pier Matteo Barone that began with a brief introduction of Ancient Rome while looking out over Circus Maximus and the Palatine Hill backdrop. Moving on in the direction of the Mouth of Truth and the entrance to the ancient commercial marketplace, Prof. Barone talked about the food routes from overseas to the city center and pointed out where the cattle, vegetable and fish markets were located. 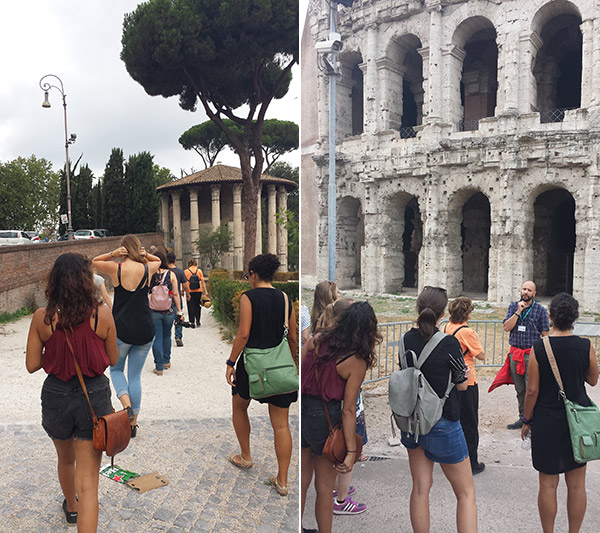 The itinerary covered a number of Rome’s treasured monuments in the area including the Temple of Apollo, the Temple Hercules, the archaeological site of Sant’Omobono and the Arch of Janus, the only quadrifrons triumphal arch preserved in Rome. From the ancient open-air Theater of Marcellus, we arrived at the Porticus Octaviae entance to the Roman Jewish Ghetto where, just as it began to rain, we ducked into the restaurant Ba’ Ghetto for a much enjoyed traditional lunch.