Professor Cecilia Canziani joins judging panel for We the People, We the Arts 2018

An international jury announced winners of an art competition on UN Sustainable Development Goals (SDGs) at the residence of the Swiss Ambassador Thomas Kolly on Thursday May 10. Each of the four winners and 25 finalists were given cash prizes, certificates and other gifts.

Organised by the Embassy of Switzerland in collaboration with several local and international partners, the competition titled ‘We the Peoples, We the Arts 2018’ invited students to produce artwork in four categories – sculpture, painting and miniature painting and print making – on themes related to the 17 Sustainable Development Goals of the UN. Fine arts students aged 18 and above enrolled in accredited Pakistani colleges and universities were eligible to participate.

Murk Mangi was declared the winner in the painting category. Originally from Larkana, she is currently studying fine arts at Beaconhouse National University in Lahore. Fahiem Ul Haq, a student of Balochistan University Institute of Engineering and Management Sciences, Quetta, made the winning sculpture. The award for miniature painting went to Lahore’s Zainab Aamir, who is studying fine arts at Kinnaird College for Women. Zainub Abdulhussain bagged the prize for printmaking. She is finishing her degree at the Indus Valley School of Arts and Architecture in Karachi. Tooba Ashraf and Gulsoom Musa were highly commended by the jury in painting and miniature painting respectively. 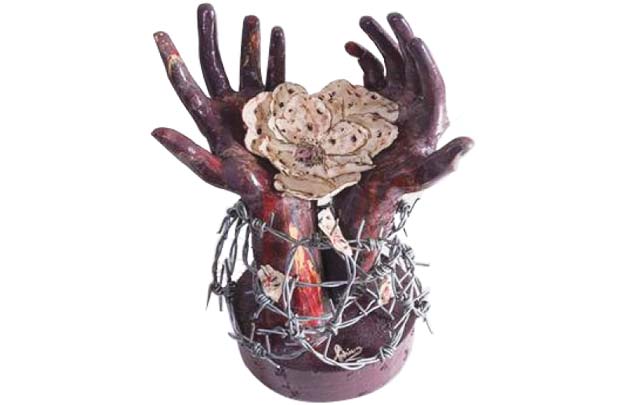 Gender equality, women’s empowerment, child rights, education, poverty and environment were recurrent themes of the 146 artworks received in February. In March, a first round of the jury selected 25 finalists. A second round of the jury took place on 9th May, in which one winner from each category was selected. Each of the four winners were awarded 500 Swiss francs (roughly Rs 57,600). All the finalists were invited to Islamabad to participate in the award ceremony, where they were each awarded 200 Swiss francs (roughly Rs23,000). Artwork from all the 25 finalists was featured in a high-quality catalogue and was auctioned at PNCA on Monday, May 14.